Report ranks Ann Arbor among top 10 metros with rising home values
Posted by Brian and Mary Bundesen at 11:44 AM No comments:

The real estate market has dramatically changed in recent months, and all indications are that there will be more changes in the next 90 days. Come to this FREE, No obligation 45 minute Seminar to learn:

--Current market conditions in Washtenaw County, Michigan.
--Short Sales, Foreclosures, and private party sales. Similarities and KEY differences
--Best (and worst) online resources.
--Explore current financing programs and options.
--Learn how to look at a home like a builder and the 5 Key things home inspectors look for.
--Much, much more

The Bundesen Team at Real Estate One has been teaching First-Time Home Buyer Seminars since 2006, and we are launching our all new series for 2012. We'll be joined by Tom Bullard of Huron Valley Financial, and Gyll Stanford of Stanford Enterprises Remodeling. We're also offering FREE Chair massages courtesy of Sherry Perkins of Raindrop Therapy.

Our Seminars are fast-paced, fact-filled, and give you a look at what goes on 'in the trenches' of today's Ann Arbor area real estate market.

This is an hour well spent. You will definitely learn something you didn't know before.

FREE! FREE FREE! No Cost, No Obligation, and you don't need to be pre-qualified by a Lender to attend.

Seminar will be Tuesday, April 3  at 7:00PM to 8:00PM
Mallets Creek Library
3090 Eisenhower Parkway
Ann Arbor
Posted by Brian and Mary Bundesen at 7:30 AM 4 comments:

According to a recently published article in REALTOR Magazine, nationally, foreclosures increased again in January as banks continued to work through a large backlogs of defaulting loans in their books, RealtyTrac reports. The number of foreclosure filings — including default notices, scheduled auctions, and bank repossessions — increased 3 percent from December to January.
However, the numbers were significantly down compared to one year earlier, RealtyTrac reports.
Last month, one in every 624 households received a foreclosure filing — a drop of 19 percent compared to January 2011.

Foreclosures Pick Up Pace, Banks Work Through Glut
Posted by Brian and Mary Bundesen at 9:33 AM No comments:

Ann Arbor and Washtenaw County
According to the year-end report, recently released by the Ann Arbor Area Board of Realtors, the overall real estate market in Ann Arbor and throughout Washtenaw County, continues to show improvement. This is cause for optimism. While sales in units were pretty much equal in a December 2011 to December 2010 comparison, and slightly down year over year, there are other encouraging indicators.

Total sales dollar volume for 2011 was up by 2% over 2010. This is primarily due to incremental price increases on property. Another good indicator is Average Sales Price, which in 2011 was 5% above ASP in 2010. $194,338 vs. $184,217. The main cause for optimism is that these improving sales are not due to any incentive program, like the first time home buyer tax credit. Most experts agree that this growth is due to the continuing historically low interest rates, coupled with an overall growth in buyer confidence. 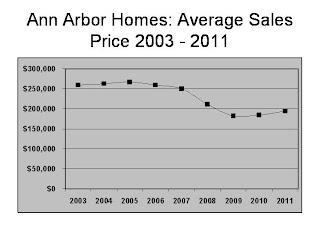 Also, MSN Real Estate and Bert Sperling of Sperling’s Best Places recently ranked Ann Arbor as one of the 10 best areas in the country for livability and affordability. This ranking was based on: Places with lower than average unemployment, short commuting times, and lots of cultural and recreational options. These are not so called “Booming” markets, just places with more stable economies and less stress, thanks to lower crime rates, relatively healthy population, access to good medical care, and lower rates of divorce and suicide. Ann Arbor also made the list, because, while we did experience significant job loss, we did not lose as many jobs as most other markets.

State of Michigan
The whole state of Michigan also closed the year with strong sales in 2011. For the last six months of 2011, Michigan’s monthly home sales in units outpaced 2010, providing good evidence of recovery as we move into 2012. According to Multiple Listing Service (MLS) reports compiled by the Michigan Association of Realtors, 8,495 single family homes were sold state-wide in December 2011, and increase of 8.44% over December 2010. At the same time, the December Y.T.D. Average Sales Price was $107,568, which was above both 2010 and 2009. December proved to be an exceptional month for 15 of Michigan’s 40 reporting MLS’s, who reported a greater than 20% increase in sales volume. Three areas (Emmet County, St. Joseph’s County, and West Central MLS all showed a sales volume increase of greater than 40%.

NationwideNationally, existing home sales were also trending upwards for the first time in a long time. According to a report by the National Association of Realtors, home sales were up for three consecutive months (Oct., Nov., Dec.) 2011 vs. the same time frame in 2010. The data shows total existing home sales rose 5% to a seasonally adjusted rate of 4.61 million units in December from a downwardly revised 4.39 million in November, and are 3.6% higher than the 4.45 million unit level in December 2010. These numbers include single-family homes, town-homes, condos, and co-ops. Year over year, nationally, home sales were up 1.7%.

2012 Real Estate Market Predictions
Most experts on the local and national levels agree that a slow recovery is taking root, and we are coming off the bottom of the market (certainly locally). Lawrence Yun, the Chief Economist for the National Association of Realtors looks at indicators like Job growth, a rising rental market, stabilizing and growing stock market, and continuing high affordability, which all combine to increase buyer confidence, and bring them into the market. Another key indicator to a stabilizing housing market is the amount of inventory, which is also down dramatically on both a local and national level. This is due in large part to the so-called “Shadow inventory” of Bank Owned properties which has not been released onto the market, and the large but unknown number of home-owners who are underwater on their home, would like to sell, are not behind in their payments, but would love to sell.
For 2012, prices are expected to continue to rise slightly, both in existing home sales, and new home sales. Buyers may not get the same bargain, price-wise, but continued low interest rates make purchasing attractive. The National Association of Realtors is predicting a 5% increase in 2012 over 2011, with the pockets of opportunity coming from these sectors:
1) International Investors: Foreign buyers are streaming to US investment real estate due to the factors of low prices, favorable exchange rates, and instability of Western european economies.
2) Distressed Inventories in Good Areas: NAR is noticing growth trends back to walkable neighborhoods in cities. A good growth opportunity.
3) Rentals: As we continue through the process of foreclosures and bankruptcies, there is ample growth in rentals, until these people position themselves to buy.
4) Commercial: As the commercial market starts to stabilize, it adds to the overall confidence level in the residential market. Complete turn around is still two or more years down the road, but the ship is beginning to make the turns
Posted by Brian and Mary Bundesen at 11:24 AM 1 comment: